I’ve done thousands of pitches over the last 25 years. Whether I was selling a product or service, advocating for legislative change, or raising capital – I can confidently say that the single most powerful weapon in my arsenal was my ability to properly get my brand story across.

These storytellers were able to paint a wonderful picture and each had a keen ability to take the viewer or prospect on a ride.

A well-told story gets the viewers emotions evolved. Involved at such at a level in which they don’t want the story to end. A level in which it affects them psychologically and biologically at a chemical level. A level that gets the pleasure center of the brain going.

Whether getting someone to invest in you or buy your product or idea, the goal is to get them to want to become part of the story.

Let’s think about some of the movies you have watched in your life. Some had you on the edge of your seat, wanting more when the credits rolled – hoping that a future sequel was coming. These kinds of movies are the ones that we talk about and would gladly pay to see again. We can relate to these experiences and revisit in our minds again and again as if we were in the movie. We can do this easily because there was a strong emotional attachment.

On the other hand, you have most likely watched movies or TV shows that were terrible. Because there was no emotion tied to it, you got disinterested quickly and probably didn’t think about it ever again. If you want to test this, try to think back on your earliest memory as a child. Chances are it was an emotional moment.

The farthest I can remember back was my first haircut. I was crying like a baby (cause I was a baby). It was so emotional that I couldn’t stop crying and after so long told the Italian barber I hated him. With no patience left, and without skipping a beat, he calmly looked down at me and said in a heavy Italian accent responded, “Yeah, I hate-a-you-too kid”.

The point is, it was my first memory because there was emotion tied to it. Try it at home if you don’t believe me.

As a marketer, you have the ability to architect the brand story to create a certain emotion in the viewer.

For example, Natierra, a food brand with the motto “Superfoods for the soul” is owned by BrandStorm Inc, a specialty food manufacturer that believes in conscious business practices and fostering sustainability.

“Superfoods with Soul” is achieved in that for every bag or shaker of select superfoods and Premium Crunchy Fruit Snacks, a meal is provided to a child in need in Haiti. Natierra has cleverly branded it “Buy One Bag, Feed One Child” 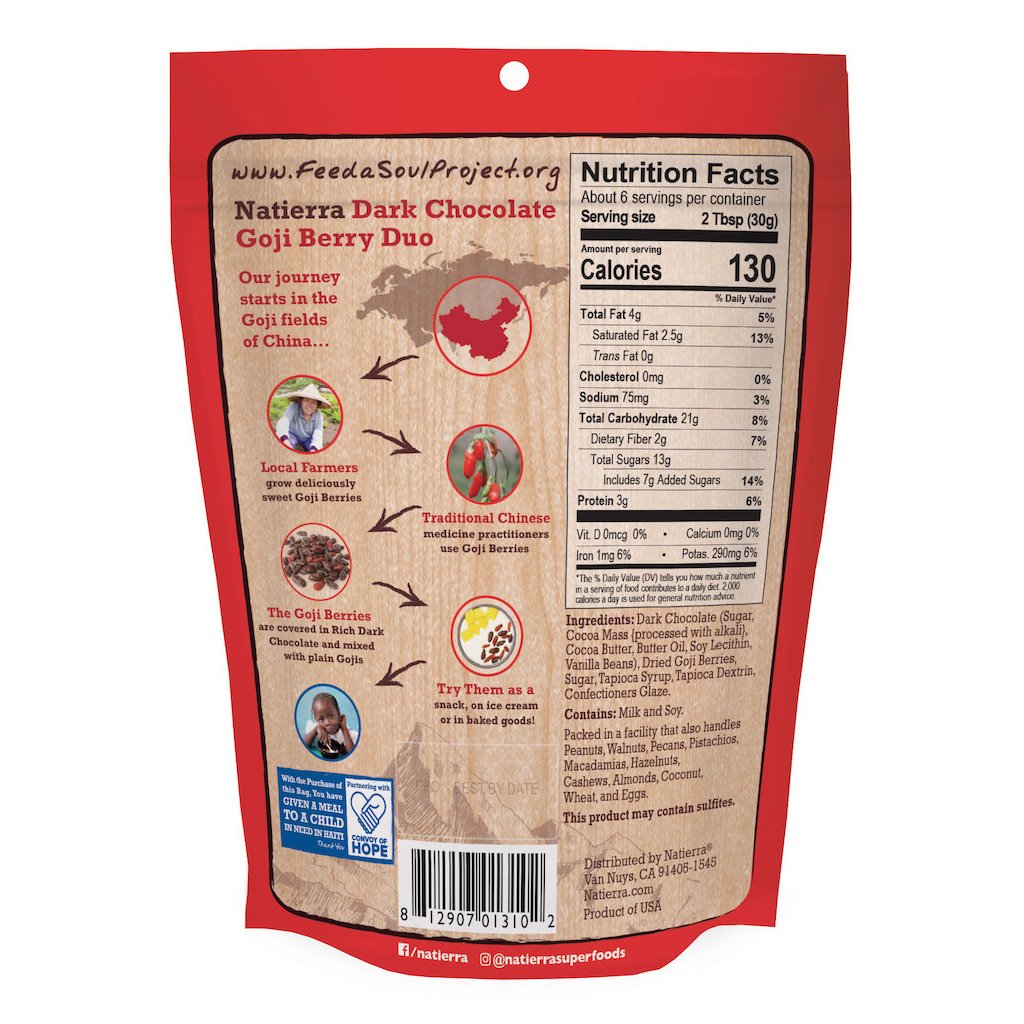 This “Feed a Soul Project” really helps to tell a great brand story. The back side of the packaging traces the process back to Goji fields in China and further creates an emotional attachment by explaining to the reader that purchasing this bag will help provide a meal for a child in need.

In fact, they even word it in past tense so the reader gets a sensation of helping before even making a purchase. It makes it an almost intimate, 1 on 1 situation between the person holding the bag and a hungry child in Haiti.

It’s good to think about your pitch (or marketing, or product design) like the back of this bag of goji berries. If you can pair the right backstory with an awesome future, you will beat your competitors.

Stories work even when you our your marketing materials aren’t around.

Did you hear about that shoe company that buys a pair of shoes for the poor every time a pair of new shoes is sold? I’ll bet you did.

In 2006, 30 year-old Blake Mycoskie was vacationing in Argentina and met a woman who was working as a volunteer delivering shoes to children. Blake offered to help and got to see first hand the many shoeless children in Argentina. The lack of shoes was a major contributor to diseases in children.

This problem gave him the idea for his eventual company.

Blake set out with the goal of providing a new pair of free shoes to youth of Argentina and other developing nations. For every pair he sold in North America, he would donate a pair to children in need in developing countries.

He commissioned shoe makers in Argentina to manufacture 250 pairs of shoes. After an article ran in the Los Angeles Times, the company secured online orders for nine times the available stock and over 10,000 pairs were sold in the first year. In their first year, the company distributed 10,000 free shoes to Argentinian children.

Talk about a great brand story to get the company off the ground!

To keep the story going, In 2007, Blake’s company launched the first annual “One Day Without Shoes” event, which encouraged participants to go shoeless for one day in order to raise awareness about the impact shoes can have on a child’s life. AOL, Flickr, and the Discovery Channel sponsored the event.

500 retailers were carrying the brand by 2011. Toms launched its eyewear line in the same year. By 2012 over two million pairs of new shoes had been given to children around the world.

The Daniels Fund Ethics Initiative at the University of New Mexico has described the company as an example of social entrepreneurship.

Now that’s one heck of a brand story – and all good stories end with the hero prevailing. On August 20, 2014 Bain Capital acquired 50% of Toms. Reuters reported that the transaction valued the company at $625 million. It was reported that Blake Mycoskie’s personal wealth following the deal was $300 million.

Mycoskie retained 50% ownership of Toms, as well as his role as “Chief Shoe Giver”.

But wait…There’s more! The story doesn’t end there.

Blake Mycoskie said he would use half of the proceeds from the sale to start a new fund to support socially minded entrepreneurship. Bain agreed to match his investment and continue the company’s “one-for-one” policy.

Knowing Blake’s brand story, I can honestly say that I would buy whatever he is selling because I can connect with him and his personal mission. That connection is the kind of connection you want to get with your customer. The most effective way to do so is through proper storytelling.

Psychology is a science. The brain wants to see a hero prevail. Give the brain what it wants, a hero.

You have 2 chances to create that hero. You can make them feel like a hero for making a purchase, or get them to buy into you as a hero.

It’s all about how you tell the story.